Of a Different Class: Artists in Cuba

Home News & Events Of a Different Class: Artists in Cuba 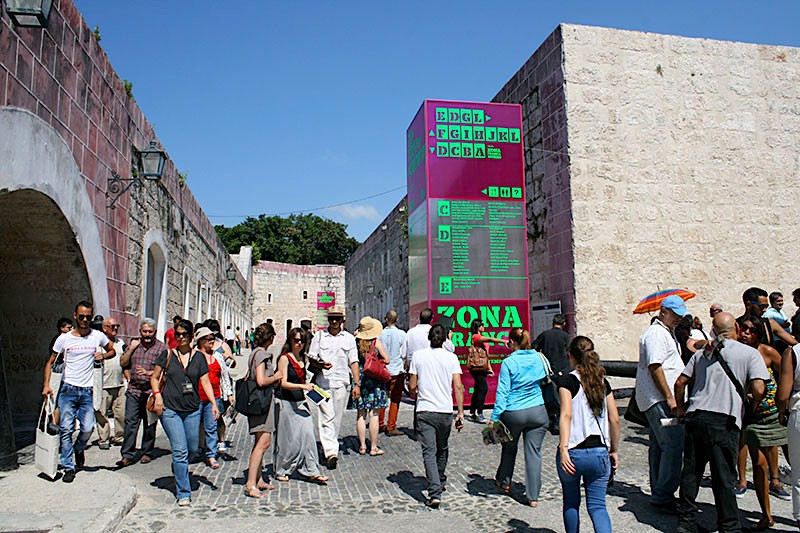 Ever since the restoration of diplomatic relations with Cuba, Americans started flocking to the region with the fear that the “old charm” – the remnants of the island’s isolation from the West and years of communist rule – will quickly disappear with the onset of capitalist tourism and the new reforms in the country. But anyone who has recently traveled to Havana will tell you that despite the political reopening and the financially savvy changes enacted by Fidel’s younger, more forward-looking brother Raul, it is a still a place of stark contrasts between the haves – a few wealthy locals and mostly tourists, and the have-nots. Step into one of the grand, restored houses, paladares, or hotels in Havana Vieja and you find yourself surrounded by luxury, the likes of pools, fine dining, and rooftop bars. But walk along some of the small streets leading to the local entertainment hub on the Malecón, and you get a glimpse of the everyday Havana; dilapidated houses with open doors and windows in lieu of air conditioners line the streets, exposing old TV sets and crowded living rooms to passerby. And if you look closer and delve into the last 50 years of the nation’s history, you’ll notice that there is one group that stands out and doesn't neatly fit into either of the categories – the Cuban artists.

As part of the Masters program in Contemporary Art, our students traveled to Havana, Cuba this fall to explore the city and its art production. In preparation for the trip, Ted A. Henken—a guest lecturer from Baruch College and leading expert on Cuba and Latin America—stopped by the Institute to share his knowledge of the island nation and his thoughts on how this special “artist class” developed on its shores.

Since Fidel Castro’s takeover in 1959, the reality of life in Cuba became rife with extreme censorship, widespread propaganda, and a loss of freedom. But Fidel’s Communist ideals also meant that access to education, medicine, and the arts would become equal for all. A dedicated effort to achieve the goal of cultural egalitarianism right after the revolution led to the emergence of new art schools such as the Escuela Nacional de Arte (National School of Arts) in 1961 that offered training in visual and performing arts for all with the aptitude to learn. The effects of these initial policies can still be seen today – Cuba boasts some of the top visual artists, ballet dancers, and theatre troupes as well as world-recognized musical talent. And on any given day, performance halls, museums and galleries are filled with an eager, local audience.

A Special Status during the Special Period

After the collapse of the Soviet Union – Cuba’s main economic ally – life in the island nation became even harder. Extreme scarcity and harsh rationing was the norm in the “Special Period” of the 1990s. In an unthinkable move to alleviate the situation, Fidel Castro legalized the U.S. currency and allowed artists the unparalleled freedom to travel abroad to sell their work. Fidel recognized the value of Cuban art production and its economic potential outside of the country. And he was right – Cuban artists quickly gained popularity in the U.S. and the world, with galleries in top art markets providing a platform to exhibit and sell their work.

The special status given to artists continues today, creating a class somewhat outside of the restrictive realms of Cuban society. While still censored, as the case of Tania Bruguera shows, Cuban artists are nonetheless privileged – both financially and socially – enjoying freedoms not available to the rest. Well-known artists, such as Arlés del Rio, have their own large studios where work that deals with the boundaries placed on the Cuban people is produced. Del Rio’s Fly Away – an outline of an airplane breaking through the boundary of a chain link fence and flying out of Cuba – was installed on the Malecón during the 2012 Havana Biennial. Nearness, a work with similar connotations, was installed in New York City’s Times Square in 2014. The Havana Biennial continues to attract the top echelons of the art world with the next installation planned for 2018, while galleries and museums in the U.S. continue to showcase Cuban art to top collectors. But with elections intended to take place next year and a potential change in leadership, only time will tell how the special standing of Cuban art and artists will continue to evolve.

See for yourself. Join our MA program in Contemporary Art for a chance to travel the globe and meet local artists.